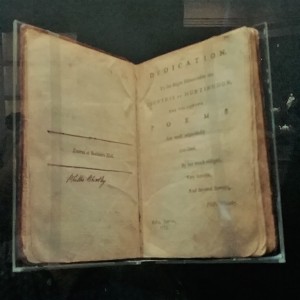 This past Sunday I had the privilege of attending the Museum of the American Revolution with fellow graduate students of the Methods in Material Culture working group. The new museum, which opened in April, is in Old City Philadelphia. Our group was given a brief introduction to the museum by Tyler Putman, fellow graduate student and Lead Gallery Educator at the museum, and then let loose to explore on our own. I unfortunately did not have a great deal of time to explore before I left for church but I did get to see this beautiful gem and example of Black material culture in the museum!

This is a signed first edition of Phillis Wheatley’s book of poetry, Poems on Various Subjects, Religious and Moral. It was published in London, England in 1773. Phillis Wheatley became the first Black women poet with the publication of this book. She was also known to have written a poem for King George III, praising him for his repeal of the Stamp Act. As the Revolutionary War raged on she was known to write several poems in support of the Continental Army and their commander George Washington. This no doubt is why this book was included in the exhibition. This book exemplified the intelligence and civic awareness of Black Americans during the 18th century when most of white society considered enslaved and free people of color to lack any semblance of intelligence, desire for freedom or of possessing an American national identity.

I am so glad I had the opportunity to see this book and plan to visit the museum again to walk through the rest of the exhibitions. If you are in Old City, do plan a visit to @amrevmuseum!